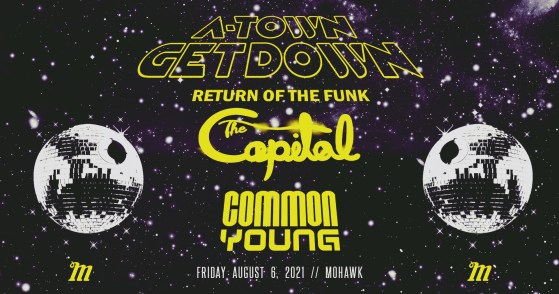 Coming off the band’s most successful run of sell out shows in late 2019, the musical cooperative known as A-Town GetDown, has been on a break only further lengthened by the COVID Pandemic.
Well, that time is now over and the band, which formed in 2014 here in Austin, TX, is ready to bring its eclectic mix of original jams and dance party favorites back to the stage to wake this town the FUNK up.
Based around the band’s phenomenal soul singer Quincy Rose Cooper, her and her gang of misfits composed of some of the city’s best musical performers (from the likes of: Heart Byrne, A Live One, Big Wy’s Brass Band, Flyjack, Panic Stricken…and the list goes on) have decided it’s time to get the band back together and get this funky train rolling again.
A-Town GetDown will be joined by The Capitol and Common Young for this night of funk and soul.
Back
{{list.tracks[currentTrack].track_title}}
{{list.tracks[currentTrack].album_title}}
{{classes.skipBackward}}
{{classes.skipForward}}
{{this.mediaPlayer.getPlaybackRate()}}X
{{ currentTime }}
{{ totalTime }}